The spectacular community art sculpture Supertoll! marks the return of Eindhoven artist Tijs Rooijakkers to the Van Abbemuseum. Rooijakkers (Vorstenbosch, 1975) has been working on the Woensel Supertoll! art project since 2013. In that same year, he built a monumental timber wall inside the museum, which rapper Fresku embellished with drawings and hand-written texts. Rooijakkers then used the boards from that wall to construct a gigantic wooden spinning top (or tol in Dutch).

In the heart of Woensel

The project was later moved to the area of Woensel, where Fresku grew up. In collaboration with social design collective Tante Netty, Rooijakkers asked the local residents to write down their motivations and ambitions on their own boards. With these boards, Rooijakkers created large wooden clusters spread across the neighbourhood. A permanent sculpture was eventually erected in the heart of Woensel: a ‘supertol’ (super spinning top) covered in hand-written texts by both Fresku and local residents. 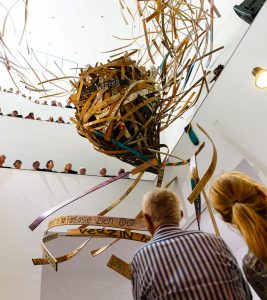 The art project brought hundreds of Eindhoven residents together and literally got them moving. The top stands for movement from within, and its inner strength appeals to Rooijakkers. Through co-operation the artist succeeds in letting his environment become a part of the dynamic Supertoll! world. Tijs Rooijakkers won the 2017 Eindhoven Culture Prize with the Woensel Supertoll! project.

Together with artist Hella Hartogs, the Van Abbemuseum choir developed three sound manifestations in the middle of the Woensel Supertoll! installation in the tower of the museum. Many thanks to Hella Hertogs, Braz, Rianne Wilbers and the Van Abbemuseum choir, led by Willy de Rooij. Niels Groenendijk made a beautiful video. Watch it here.

More information about the sound manifestations of Hella Hartogs on the website of the Van Abbemuseum.